An OS for Everypony!

PonyOS is a hobby Unix-like operating system, designed for ponies like you!

Is PonyOS a Linux distribution?

No! PonyOS uses its own kernel, built from scratch. 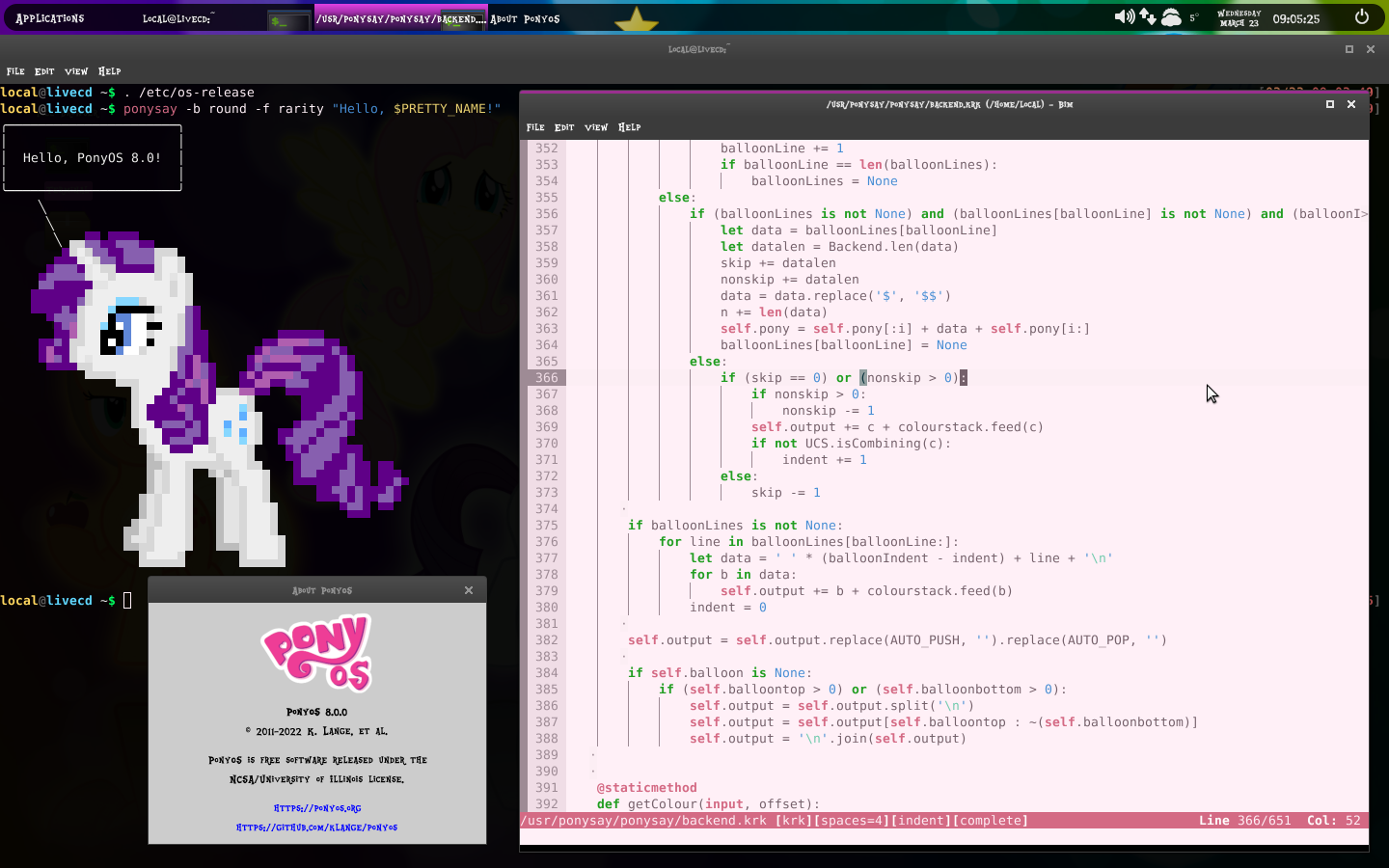 PonyOS 8.0 now has twice the ponies!

The CD should boot in QEMU, VirtualBox, VMWare, or even on real hardware if you're a brave pony!

For all VMs, 1GB of RAM is recommended. When using VirtualBox, select "Other/Unknown 64-bit" for the OS type. For VMware, use a 64-bit guest configuration. For QEMU, qemu-system-x86_64 -smp 4 -m 1G -enable-kvm -soundhw ac97 -cdrom ponyos.iso should suffice.

PonyOS is developed through Github. You can find our repository at klange/ponyos.

Does PonyOS work on real hardware?

Yes! PonyOS works on many different machines. Hardware driver support is limited, though, so for the best PonyOS experience you should use one of the supported virtual machines listed above. If you're feeling brave, you'll need a PS/2 keyboard and mouse (or legacy compatibility support in your motherboard).

Is this really not a Linux distro?

Eight years later and people still don't believe us! PonyOS is not a Linux distribution - it's also not a BSD, or a Hurd, or a Minix, or a Solaris!

Does PonyOS come with a compiler?

PonyOS 8.0 does not include a compiler on the CD, as it significantly increases the size of the disk image. You can use the package manager to install the build-essential package and get a full GCC toolchain.

Kuroko, a dynamic programming language with familiar syntax, is included on the live images.

Can I put this on a bootable USB drive?

Probably, but see "Does PonyOS work on real hardware?" above. Directly copying the ISO to a USB stick should work (eg., using dd).

How do I move windows?

You can drag them by their title bars or hold Alt and then click and drag anywhere.

How do I change the display resolution?

In VirtualBox and VMware the display should automatically resize to fit the host window. For QEMU, use the set-resolution utility.

I started an application and it doesn't have a title bar, how do I exit it?

How do I install PonyOS?

At the moment, PonyOS is only offered as a live CD with no installation option, for your safety.

Can I upgrade from an earlier release of PonyOS?

No. Please use the latest live CD of PonyOS 8.0. PonyOS 8.0 is not backwards compatible with previous 32-bit PonyOSes.

Oh gods, that damn font is back, please can I turn it off!?

The Equestria font can be disabled from the bootloader menu.

What are people saying about PonyOS?

you have gone too far this time you fucking pony fags....

I just can't not believe these guys are sick fucks. Either way, getting to run vim in your shitty furry pedo OS is an accomplishment I must recognize. Fuck this shit.

Another Anon, from /prog/

This is gonna buck up my computer so bad.

Thanks, but no thanks.

Copyright 2013-2022 K Lange
PonyOS is based on ToaruOS, which is free software released under the terms of the NCSA/University of Illinois license.
PonyOS contains software from third parties under several other licenses, which may be found in the Help Browser application within the OS.
PonyOS is a work of parody, and its fair use of characters and other intellectual property of Hasbro, Inc. is protected by copyright laws of the United States as well as international treaties and conventions.
PonyOS is not endorsed by or affiliated with Hasbro, Inc.
Happy April Fools Day 2022!